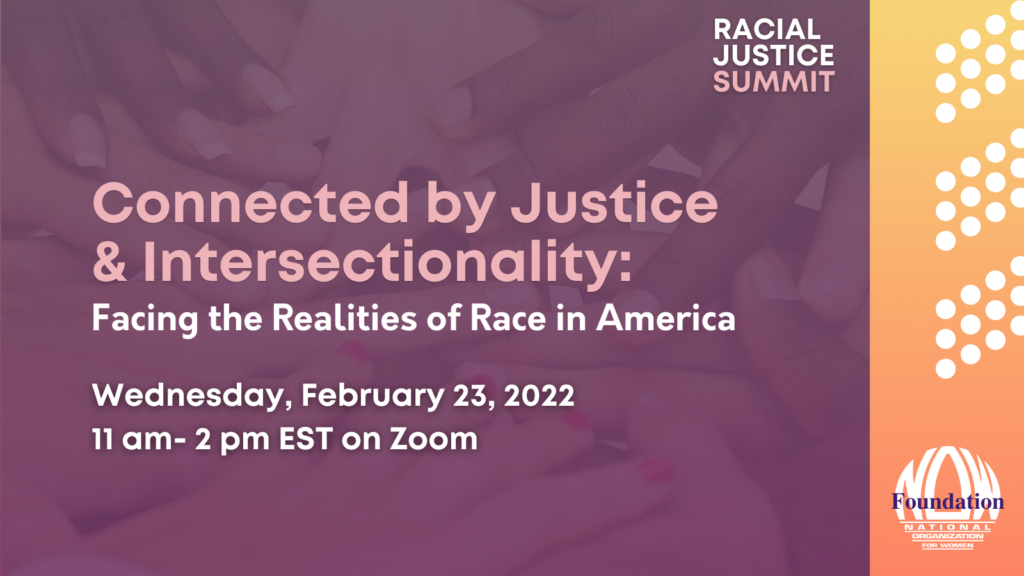 After enduring another year paralyzed by a pandemic, an escalating financial crisis, political hyperpolarization, supply chain issues, labor shortages, and a coordinated assault on civil rights, the United States is facing a turning point that endangers our fragile democracy. This circling storm threatens marginalized communities of color, in particular. But as we face intersectional crises, we must identify intersectional solutions to support intersectional justice.

This year the National Organization for Women (NOW) will host our annual Racial Justice Summit [Connected by Justice & Intersectionality: Facing the Realities of Race in America] on Wednesday, February 23, 2022. Throughout the event, we will focus on discussions that address the critical and intersectional issues of race and reproductive rights and health, voting rights, and the housing crisis.  The event will feature dialogue between notable thought leaders, Congressional members, constituents, and stakeholders of all different backgrounds regarding racial justice.

Reproductive rights have long been the crown jewel in the far-right’s attack on women. Masquerading as a crusade to “preserve life,” their extreme position is a thinly-veiled red herring that controls women, stripping them of the fundamental right to bodily autonomy. But no draconian legislation – even overturning Roe v. Wade – will ever prevent women from getting abortions; it will just impose crippling and dangerous burdens on low-income women and women of color to access these services safely.

If the Supreme Court overturns Roe, it will reinforce and perpetuate the systemic racism in the health care system that kills thousands of women of color in the United States each year. As a country with one of the highest Black maternal mortality rates in the world, we should be increasing access to more health-related services, providers, and resources, not eliminating them, making it even more dangerous to be a woman of color.

This panel will evaluate the current state of reproductive justice, discuss what a post-Roe world will look like and what activists are doing to fight back.

The foundation of a fair and functioning democracy demands a system of government by which the people elect their representatives. However, since the 2016 presidential election, voting rights have been under attack in the United States with more than 50 laws in various states having been introduced to limit voting in 2021 alone. These laws have proposed a multitude of oppressive tactics to silence the public, such as unnecessary voter registration obstacles, stringent guidelines around voter identification, decreasing early voting, and eliminating ballot drop boxes. These calculated strategies work together like a well-oiled machine to silence minority voices including communities of color, the LGBTQIA+ community, persons with disabilities, women, and low-income populations. By prohibiting voters to elect leaders who best represent their unique ideals, there is no one to advocate for and pass key legislation that promotes social and economic equality for all.

In 2021, progressive activists and legislators tried to pass legislation, like the John Lewis Voting Rights Advancement Act and the Freedom to Vote Act, which would combat voter suppression laws but failed due to the filibuster, a relic of the Jim Crow era. To begin fixing crucial issues within our country, citizens must be empowered and encouraged to exercise their fundamental rights without prohibitions.

Join our panel’s conversation of voting rights as we dismantle the lies and damaging rhetoric around voting suppression, address the consequences of not combating voting rights restrictions, and highlight the next steps grassroots activists can take to end these barriers to democracy and ensure voter equality.

Even before the COVID-19 pandemic began, people in the United States were running out of affordable places to live. However, through lack of action by both the Trump and Biden administrations, the housing crisis continues to escalate, disproportionately affecting the BIPOC community – another pillar that props up our structural and systemic racism.

In many cases, skin color predetermines a person’s eligibility for affordable housing, housing loans, and other financial assistance. Minority groups, particularly Black and Indigenous communities, disproportionately experience homelessness – and the majority of these are families and children. And those who experience the stress of housing discrimination, displacement, or homelessness endure related issues including increases in violence (especially violence against women), food insecurity, lack of healthcare accessibility, transportation, and much more.

As a basic human right, no American should be denied housing on the basis of race, ethnicity, sex, gender, or socioeconomic status. Join our panel as we discuss the depths of the housing crisis and how we plan to address the interconnected issues that accompany the growing issue.